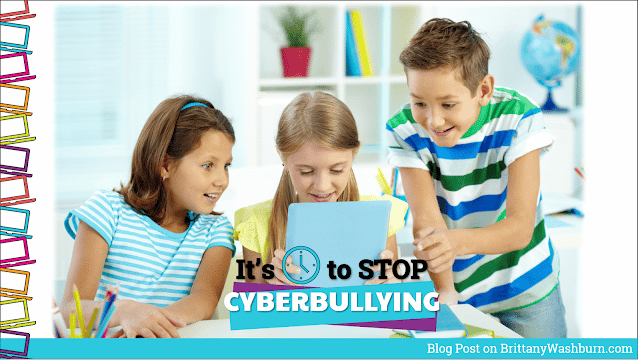 From kids to adults, cyberbullying is running rampant. As tech
teachers, there is a responsibility to teach students about being good (and
aware) digital citizens. If our students aren’t the perpetrators or the victims
– they’re the witnesses. In this post I’m going to cover what cyberbullying
looks like, what to do about it, and how to stop it.
What does cyberbullying look like?
Cyberbullying has impact all over the world, and it looks the same
in many places. When it comes to cyberbullying, it can look a lot like regular
bullying. Cyberbullying is attacking someone through the internet. It can
include insults, threats, gossip, rumors, and harassment. Cyberbullying could
include hacking someone’s account, or pretending to be someone else to
humiliate the victim. It could be in the form of words or video or pictures. It
could be on any social media platform, email, or text messaging. The bottom
line of cyberbullying is that a perpetrator is purposefully doing something
mean to someone else for the sole purpose of hurting or humiliating them. So,
it doesn’t really matter how it is done, the intent is always malicious.
For perpetrators of cyberbullying… Remember to emphasize that what
a person says on the internet is not private, and will be interpreted in the
worst possible light. Even if a student says, “It was just a joke,” it doesn’t
matter in a court of law. Whatever the words say, they will be interpreted
literally (especially in the case of threatening). Try to always be kind
everywhere, including the internet. 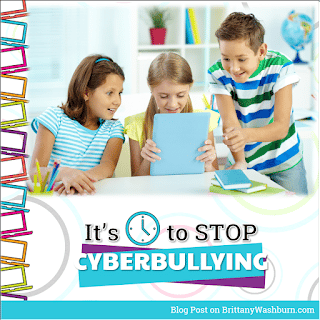 What to do about and how to stop cyberbullying?
It seems like every time I do a lesson on cyberbullying, within
the next week or two it comes up in class where someone did something that they
were just told not to do. Likewise, it’s important to note in the lesson that
there may be students in the room who are victims, perpetrators, or witnesses
of cyberbullying.
For the victims… There is a good chance that if you’re on the
internet, expressing your opinion, someone else on the internet will insult or
heckle you (even if you don’t know who they are). So, one of the ways to stay
safe is to keep your social media, phone number, and email private. Do not
share this information with anyone who you don’t know.
Block people. And if someone continues to change their information
to harass, then get help from an adult and report the person to the social
platform.
For witnesses… Do something. Encourage the person who is being
picked on online. Say something nice. Don’t laugh. Don’t help the perpetrator.
Tell an adult about it. Report them to the social media platform. Don’t spread
the rumors and gossip. Be there for the person in need. 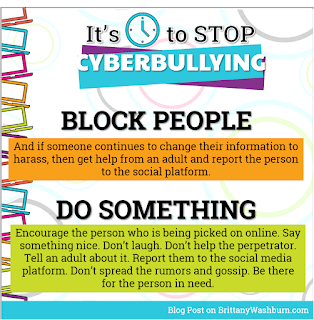 Flood the internet with good things. One of the ways to “undo” the
effects of cyberbullying is to flood the internet with good information about
the person who is the victim. Instead of attacking the cyberbully, create lots
of social media posts and information that is positive and uplifting to drown
out the negative voices. Students can get their friends together, teachers,
parents, and push the negativity to the bottom where it can’t be seen or
experienced as easy. 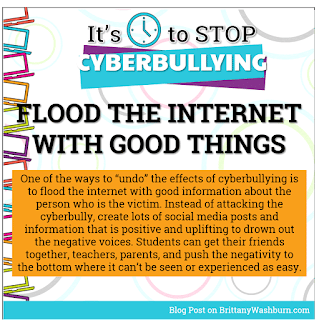 Here are some of the resources I use to teach Digital Citizenship (click on the pictures to learn more about each): 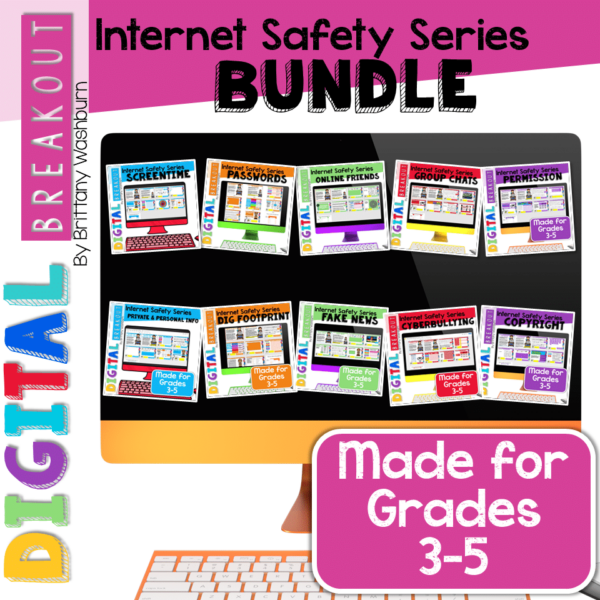 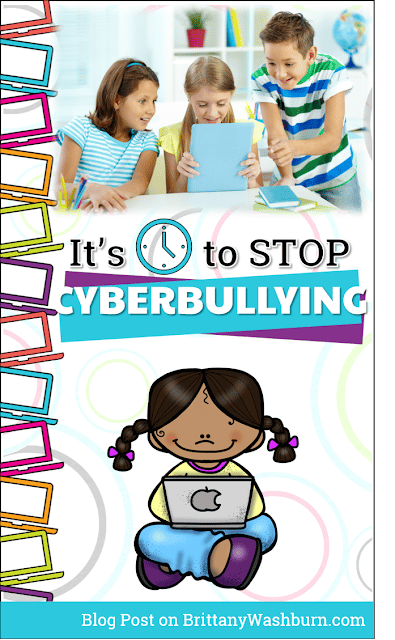 Hi, I'm Brittany. I'm an educator obsessed with technology and passionate about teaching students 21st century skills. I'm so glad you came to visit my website. Hi, I’m Brittany! I’m an educator obsessed with teaching with technology. Check out my free PD for technology teachers! 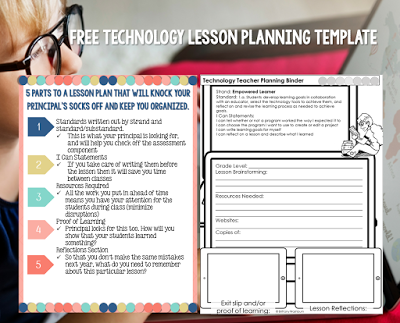 Disclaimer: this content is reader-supported, which means if you click on some of the links that I may earn a commission.

I'd love to connect with you! Find me on Social Media 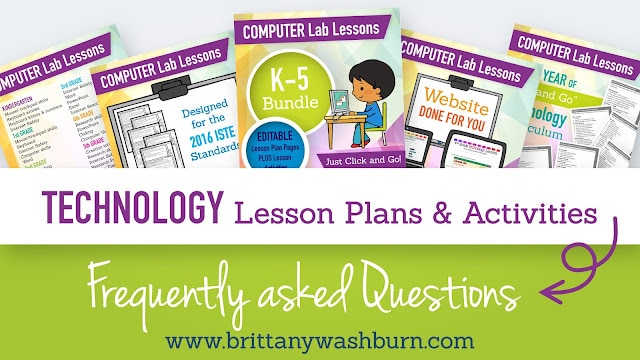 How to Use Elementary Technology Curriculum FAQ 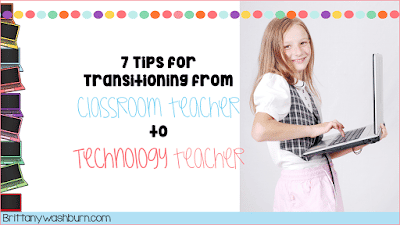 7 Tips for Transitioning from Classroom Teacher to Technology Teacher 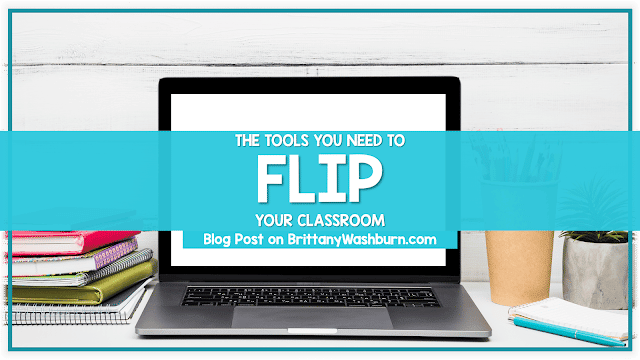 The Tools you Need to Flip Your Classroom 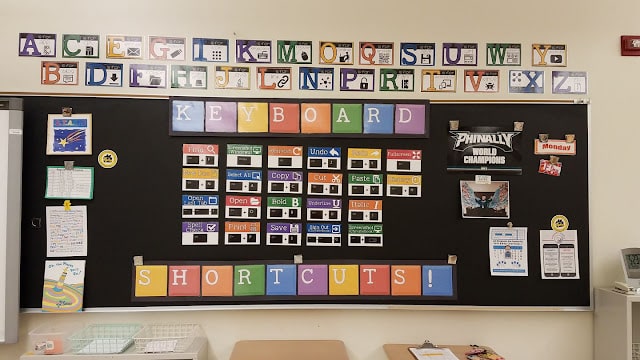 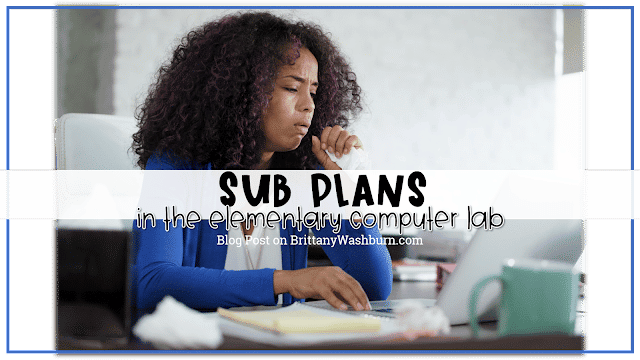 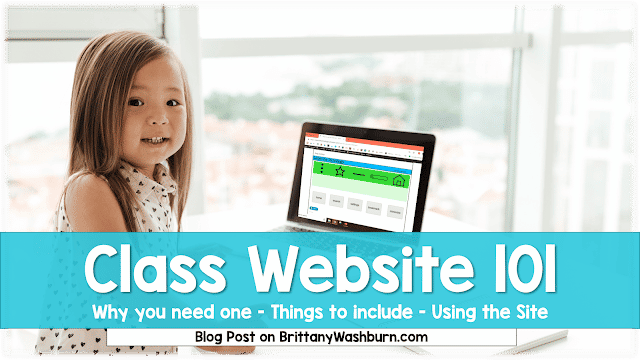 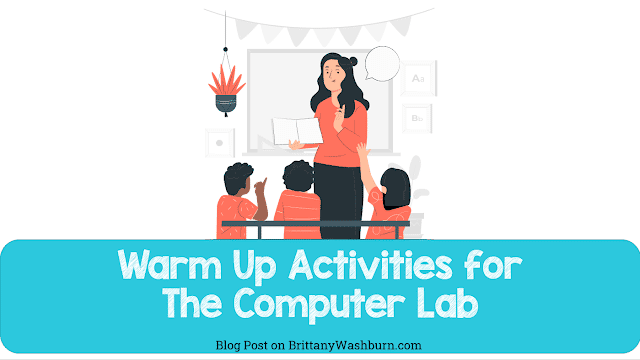 Warm Up Activities for the Computer Lab 9 Ways to Organize your Inbox

Check out these 9 ways to organize your inbox today! Standardized tests used to be paper and pencil, but more and more of them are now taken online instead.  The good news is, you can How to Build Relationships as a Specials Teacher

As a Specialist teacher, you no doubt face several hurdles that can make it more difficult for you to develop relationships with your students.  You 15 of the Best Virtual Lesson Topics

When the need arises to jump into virtual lessons, it can really help your confidence to have ideas ready to go.  Check out my advice

Wait! Your order is almost complete...

Add this offer to your order. Every week of the school year I send an email with visual lesson plans. Let me know where to send it by filling out the form here: